We show our respect for the Creator by our stewardship of creation. Care for the earth is not just an Earth Day slogan, it is a requirement of our faith. We are  called to protect people and the planet, living our faith in relationship with  all of God’s creation. This environmental challenge has fundamental moral and  ethical dimensions that cannot be ignored. (USCCB) 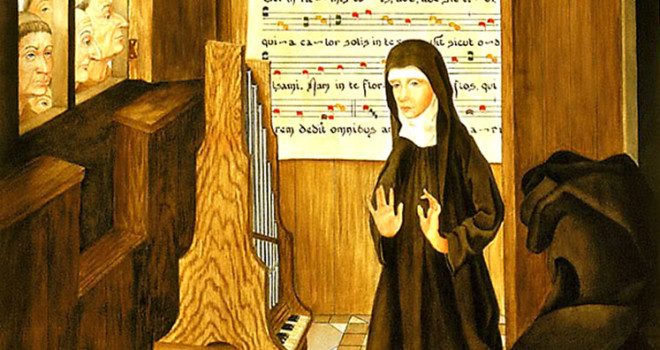 Abbess. Botanist.  Physician.  Theologian. Playwright. Composer. Doctor of the Church.  In another example of God exulting the lowly, all these titles and more have been given to St. Hildegard of Bingen, who was born the sickly youngest child of minor nobility, and eventually presented as a political offering to the Benedictines.

St. Hildegard was born around 1098, in what is today Germany. She entered the monastery at Disibodenberg 1112, and by the age of 38 became Prioress.  Due to the rapidly growing increase of vocations under Hildegard, one of her first moves was to request that she and her nuns be allowed to move to a rural, primitive monastery, possibly to separate the sincere applicants from those jumping on the bandwagon.  After refusal from the Abbot at Disibodenberg, St. Hildegard sought permission from the Archbishop of Mainz, which she received.  The Abbot still refused to let Hildegard establish a new monastery however, but he eventually changed his mind when the saint was struck with a mysterious illness she attributed to God’s displeasure with the Abbot’s reluctance.

Such close, physical connection with God wasn’t an unknown occurrence to St. Hildegard.  From a very young age, she had experienced mystical visions.  These visions closely involved all five of the human senses in a manner consistent with the saint’s spirituality. In all her works, a strong grounding in the physical world is apparent, and the concept of “viriditas”, or the lush greenness of nature, was frequently used by the saint to describe the heavenly abundance that overcomes earthly failures.  Despite the intensity and clarity of these visions though, Hildegard was tremendously reluctant to commit them to writing.

However, after being instructed by God (and a number of contemporaries) to do so, suffering another mysterious illness and ultimately receiving papal approval to document them, St. Hildegard began writing down her visions.  The first of these manuscripts is titled Scivias, and is a massive 600 pages long.  In it, details about creation, salvation, and the nature of the Trinity are interspersed with 35 beautiful illustrations.  Hildegard went on to write another two volumes documenting her visions, supervising the creation of the manuscripts- some of which still survive today- well into her seventies.

Despite her unwillingness to set her visions to paper, St. Hildegard was a voracious and enthusiastic author on other topics.  Her letters alone make up one of the largest collections of personal correspondence to survive from the Middle Ages, and her audiences range from popes to emperors to abbesses of other monasteries.

Adding the title of composer to this remarkable saint’s list, Hildegard wrote vast amounts of music, enough of which survive to make one of the largest surviving collections from a medieval composer.  Chief among them is a musical morality play titled Ordo Virtutum, which is not only the earliest example of this genre on record, but is also the only medieval drama in which both text and music have survived together.  An example of plainchant, modern recordings of it can be heard online.

St. Hildegard’s numerous medical texts, though archaic to modern standards, are innovative in their linking of human health to both the patient’s inner world as well as the environmental factors of the outer one.

Unable to contain her written expression to the known languages of the time, Hildegard invented her own- dubbed Lingua Ignota or the “Unknown Language”.  The saint constructed a 23-letter alphabet for this language, which contained over a thousand words and appeared to rely on Latin grammatical constructs.  The exact purpose of this language isn’t clear, with speculations ranging from it being a tool to encourage camaraderie among Hildegard’s nuns to it being presented by God in a vision for use as a universal language.

This remarkable woman left behind a legacy and body of work that has vast appeal, from New Agers to feminists to botanists (a genus of plant has been named after her) and astronomers (minor planet 898 Hildegard is in her honor).  In 2012, Pope Benedict XVI named her a Doctor of the Church, one of only thirty-three people to be called thus.

In Hildegard, we are given an example of a saint whose love of God manifested so strongly that it spilled over into nearly every aspect of earthly experience.  From inspiring holiness in those around her, to glorifying God in music and language and studied observation of the natural world, St. Hildegard is an example on how to fully and robustly enter into a relationship with the Divine.

Each week will be providing two questions from the Gospel reading, one for children and one for adults. Please prayerfully reflect on and discuss these questions.
Children: What is the job of the Holy Spirit?
Adults:  Who is the Holy Spirit for you? How do you respond when others do not feel his presence or power?