As we celebrate 75 years officially becoming a parish, let us look back on the history of our parish, starting at the very beginning....

Moments in the History of St. Margaret Mary Catholic Church 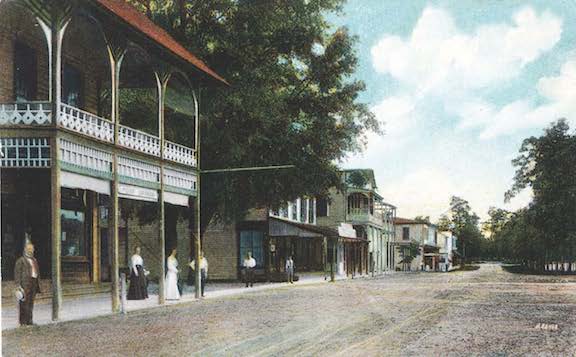 For many years Catholic residents of Winter Park attended Mass in Orlando, which was served by a resident mission priest, Father Felix Swembergh. They continued to attend there after St. James’ first church was built in 1887.

The first Mass celebrated in Winter Park was in the “Crane Cottage,” the winter residence of John H. LaMontaigne, a Rollins College professor. Priests from St. James continued to offer the Mass.

To accommodate the increasing number of people coming to Winter Park plans for a mission church of St. James began in 1921 to be named St. Margaret Mary after St. Margaret Mary Alacoque. Land was purchased by the Diocese of St. Augustine on the corner of Knowles and Canton Avenues. Through the generosity of Miss Victorine Reynaert and others, funds were gathered for a church building.  Miss Victorine made her donation in memory of her uncle, Father John H. Reynaert, a retired priest from Belgium living in the area. 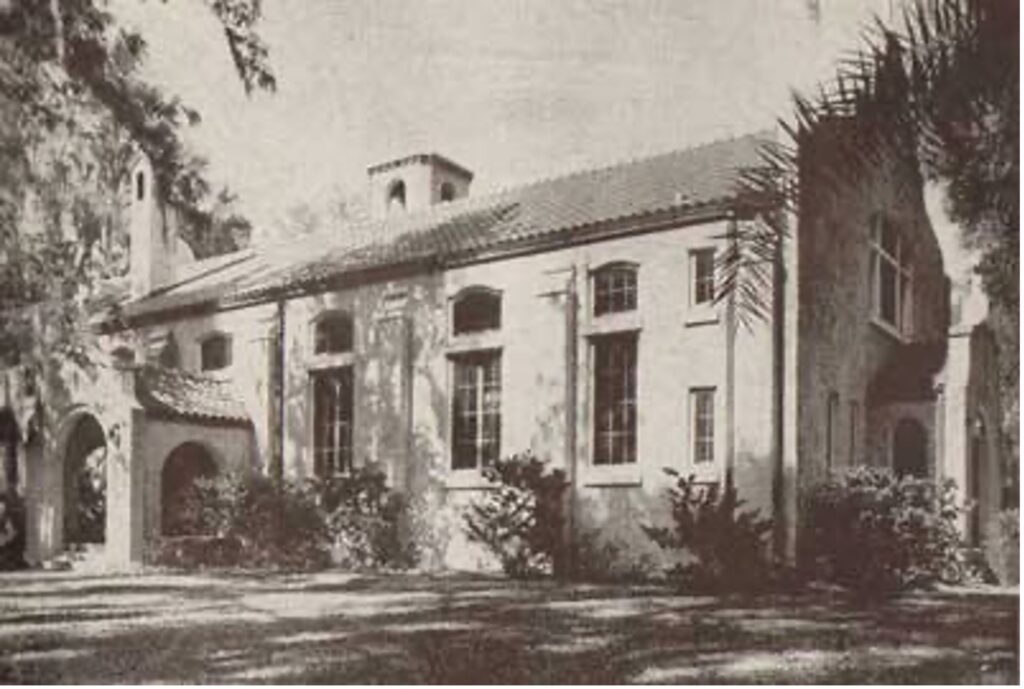 The ceremony of blessing and laying the foundation stone was held on October 17th, 1924, the Feast of St. Margaret Mary. The Spanish style building was completed in December 1924. The first Mass was celebrated December 28 with a formal opening on March 15, 1925.

Blessing of the Church 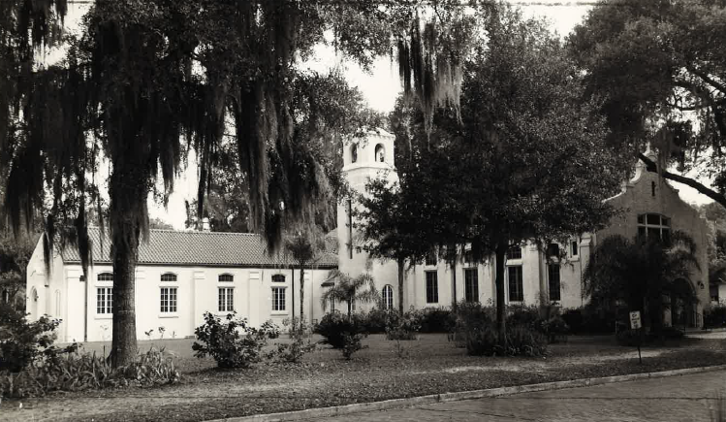 The church was officially blessed and dedicated January 30, 1927, by Bishop Patrick Barry.

Established as a Parish

The mission of St. Margaret Mary was canonically established as a parish on November 5, 1947. 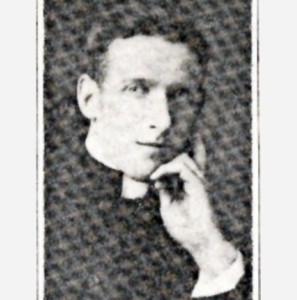 Father Daniel C. Hegarty was appointed the first Pastor of the new parish.  “To Winter Park, Father Hegarty brings much experience in the Florida parishes, and an affable and fatherly personality guaranteed to endear him at once to the parishioners of whom he is the first Pastor.”

The church was severely damaged by a fire on February 3, 1948 (the Feast of St. Blaise) and was closed for several months. It was officially reopened in a ceremony presided over by Auxiliary Bishop of St. Augustine, Bishop Thomas McDonough on January 9, 1949. 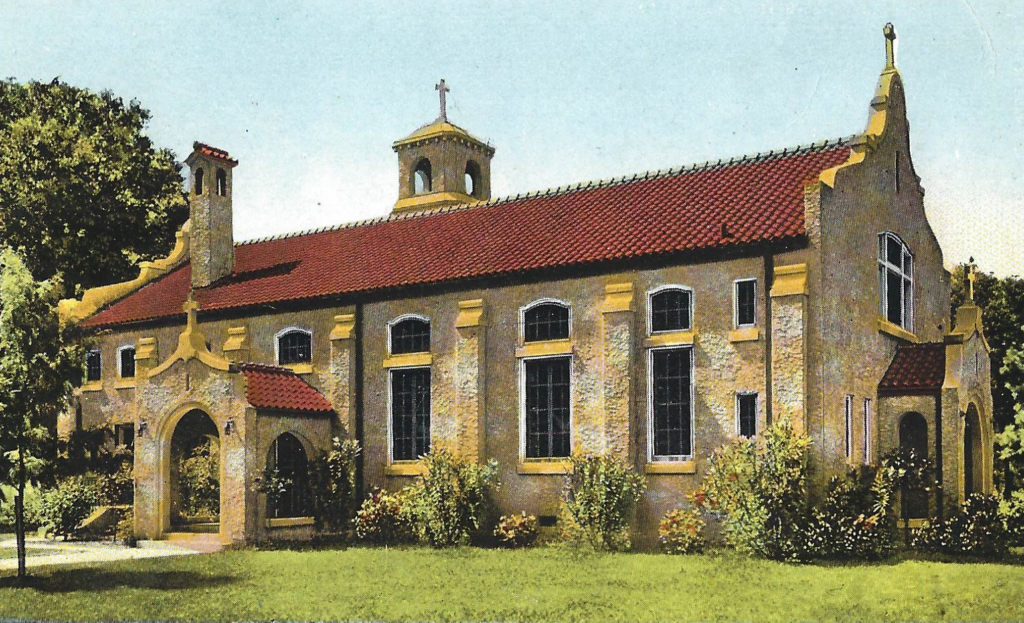 Due to the growing congregation a new wing was added to the church giving it an “L” shape. The Bruton house at 526 North Park Avenue was purchased for a convent which decades later became the priests’ rectory.

A School is Formed 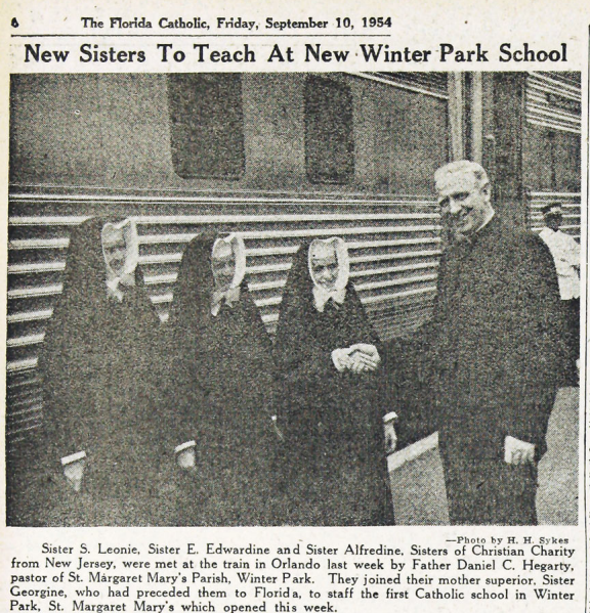 Houses on the block of Park, Canton, Knowles, and Swoop Avenues were purchased to build a school. Until it was built classes were held in the new “L” shaped church wing and some of the purchased homes. 262 children made up the initial enrollment. The Sisters of Christian Charity of Mendham, NJ arrived to teach at the school. 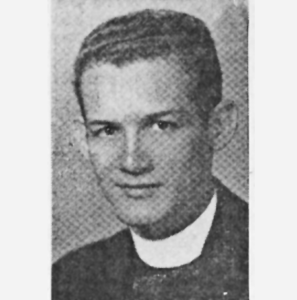 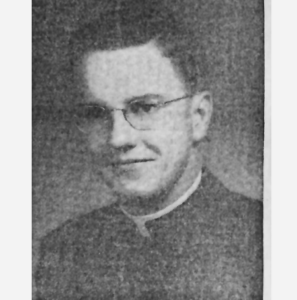 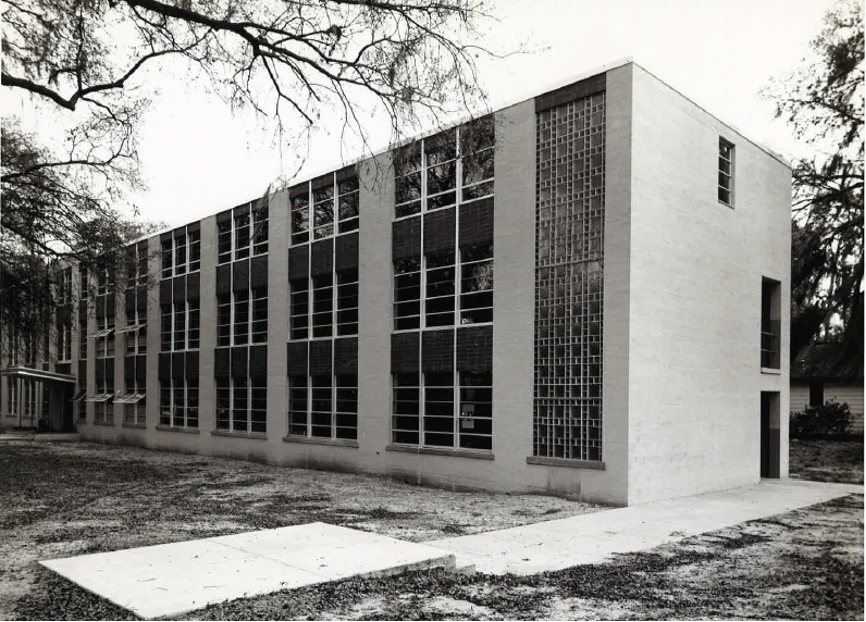 The new school was dedicated by Archbishop Joseph P. Hurley on March 25. 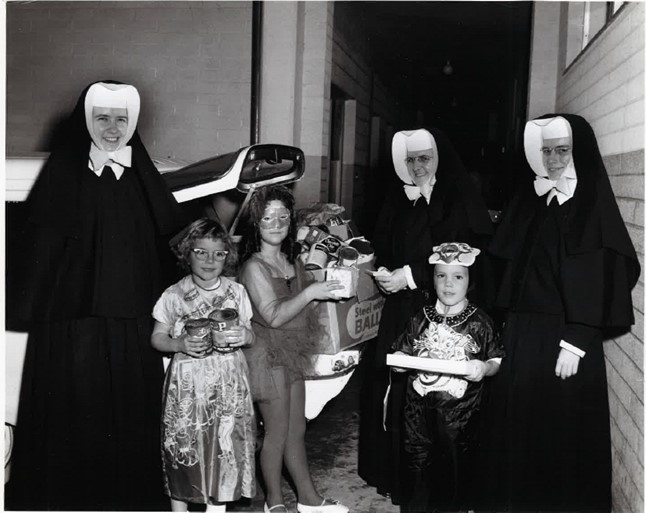 Third grade school children spearheaded a grocery collection to give “treats” to their teachers as a Halloween surprise. 1960. 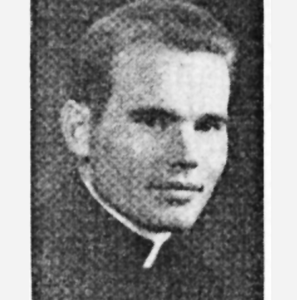 The house at 500 Knowles Avenue was purchased for use as a convent for the Sisters.

Construction on a New Church Began 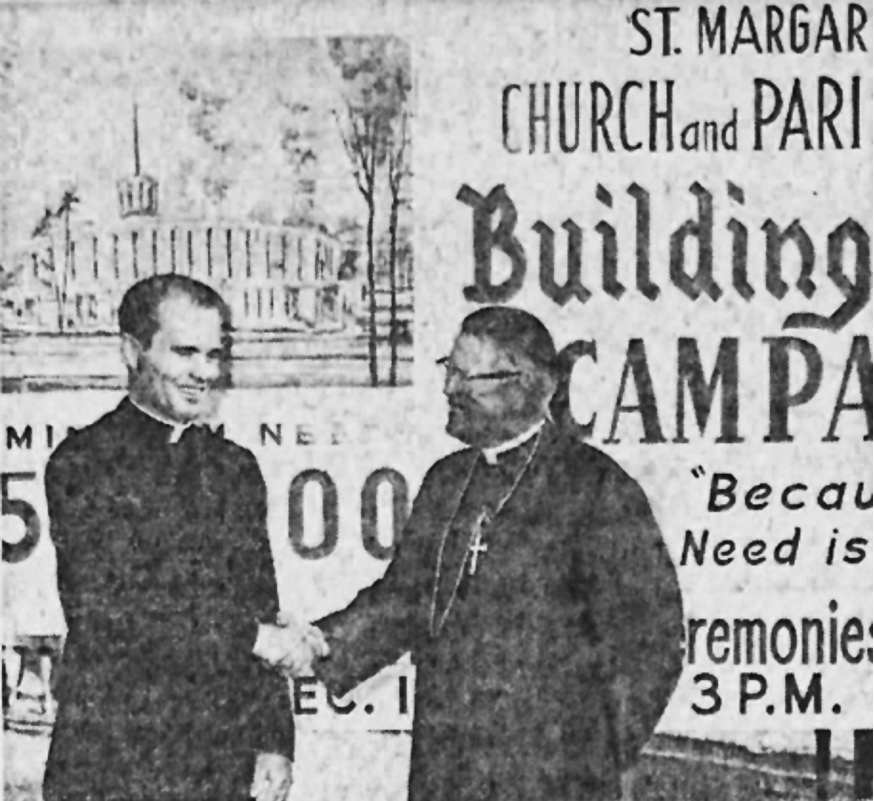 In February a building fund campaign was launched to construct a new church building.  In June the Diocese of Orlando was created out of the Diocese of St. Augustine, with Bishop William D. Borders as the first bishop. In December groundbreaking ceremonies were held and construction began for a new church. The exterior was constructed from Miami Stone while the interior used imported Carrara marble from Italy. 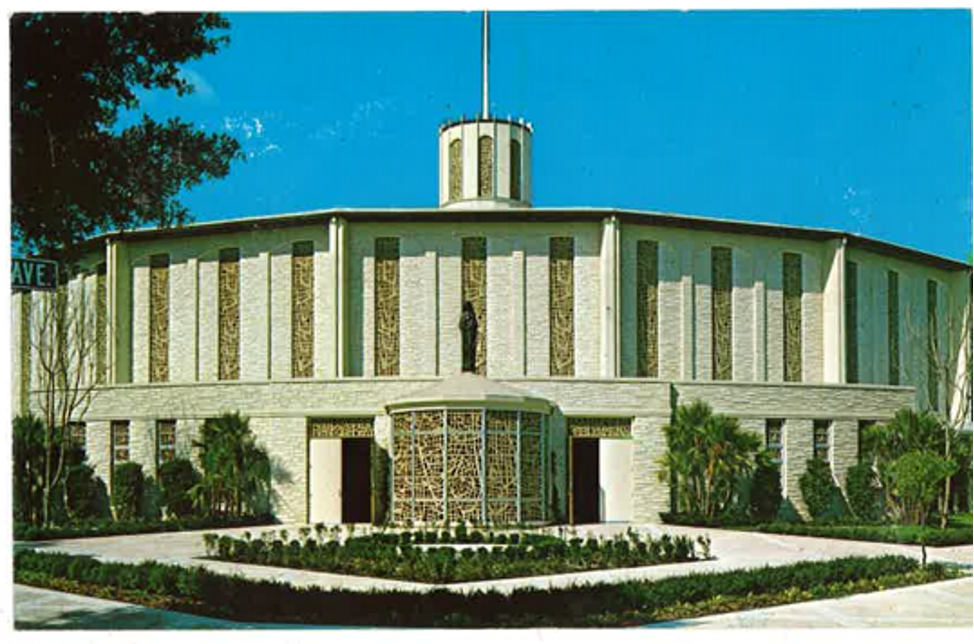 The last service in the original church was held in October 1969 and on November 2, 1969, the new church was dedicated by Bishop William D. Borders. 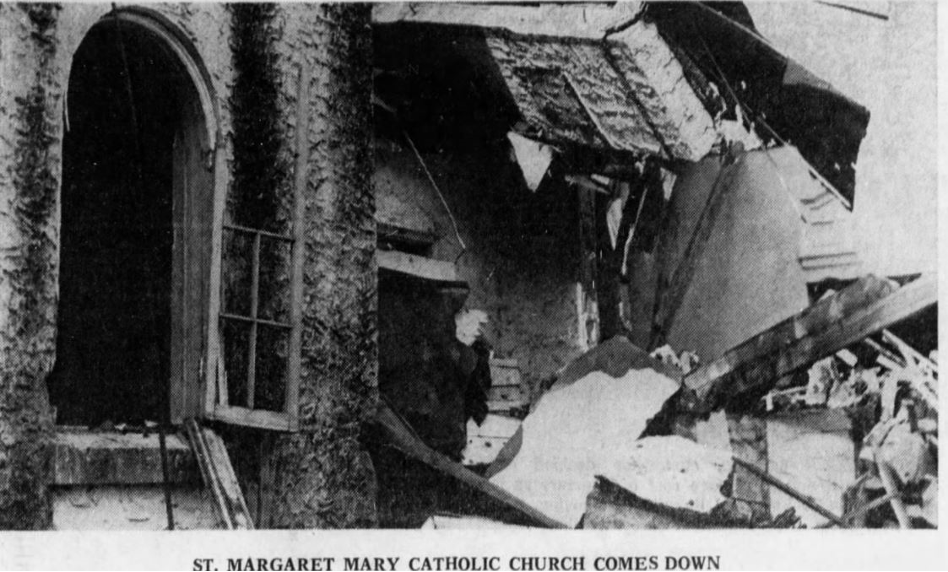 The original church building was demolished to accommodate parking for parishioners. Plans for a parish hall were begun in June 1970 with construction beginning in 1971.

In February Msgr. Wells commissioned leaders in a Neighborhood Apostolate tailored to the goals of the parish: to coordinate needs of parishioners, form communities of concerned and prayerful Christian people, foster spiritual growth through prayer meetings and discussion groups, to be ecumenical. 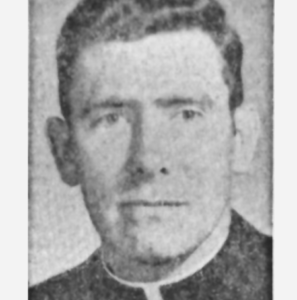 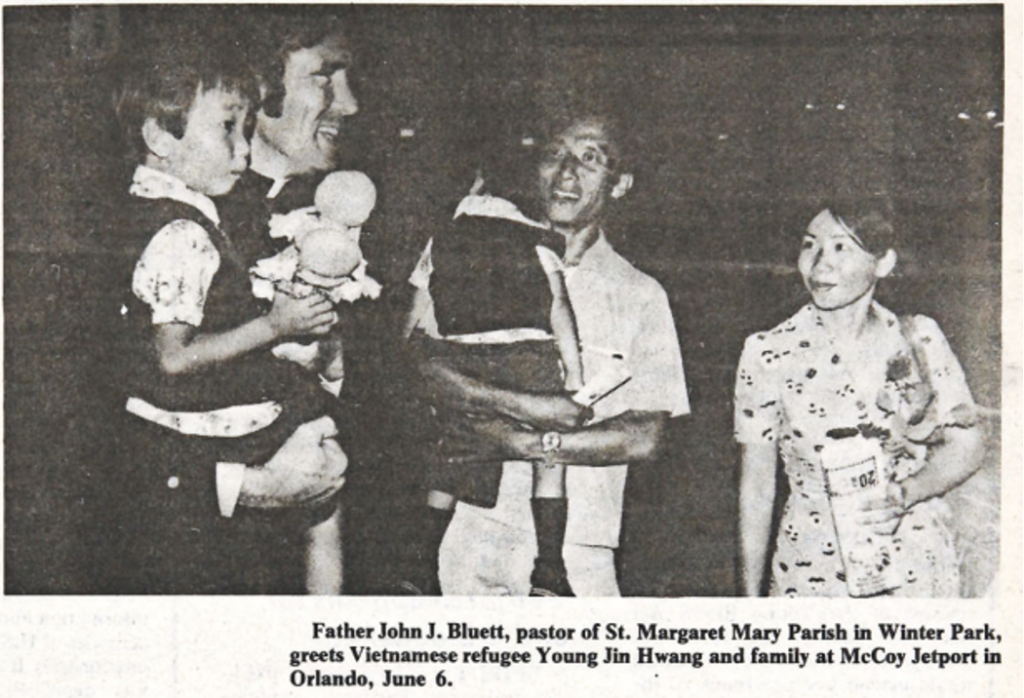 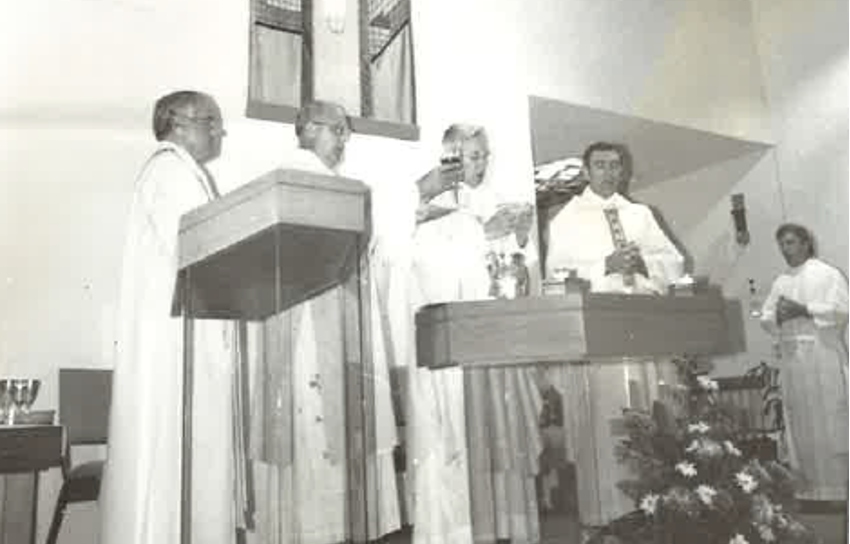 A chapel was built and blessed on October 16 by Bishop Thomas J. Grady. Jack Timmes was ordained as a Permanent Deacon to serve at the parish.

Sister Pat O’Malley and Ruth Bliss spearhead the establishment of a Thanksgiving/Christmas store to assist families with dignity and respect. 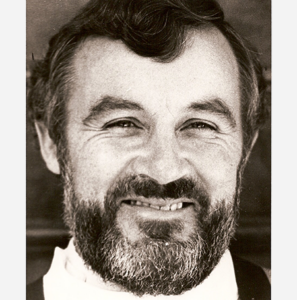 Renovations to the School 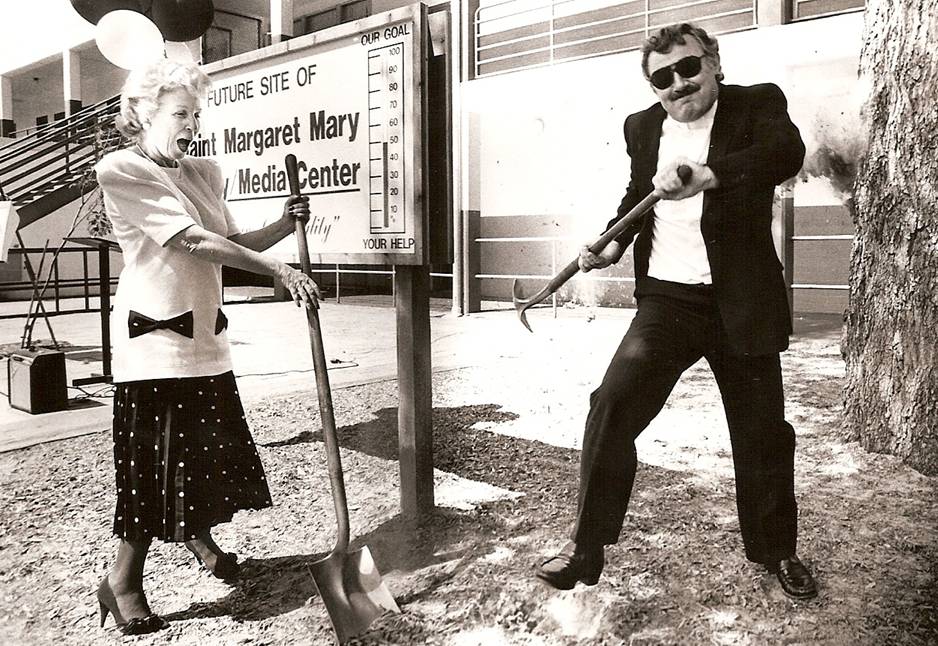 Renovations were made to the school to include a media center, library, computer classroom and administrative offices.

Korean Catholics began holding their Masses at St. Margaret Mary. This continued until their mission church, St. Ignatius Kim, was built in 1992.

St. Margaret Mary built its first Habitat for Humanity home for the Eugene and Cheryl Farley family, the beginning of many years of involvement. 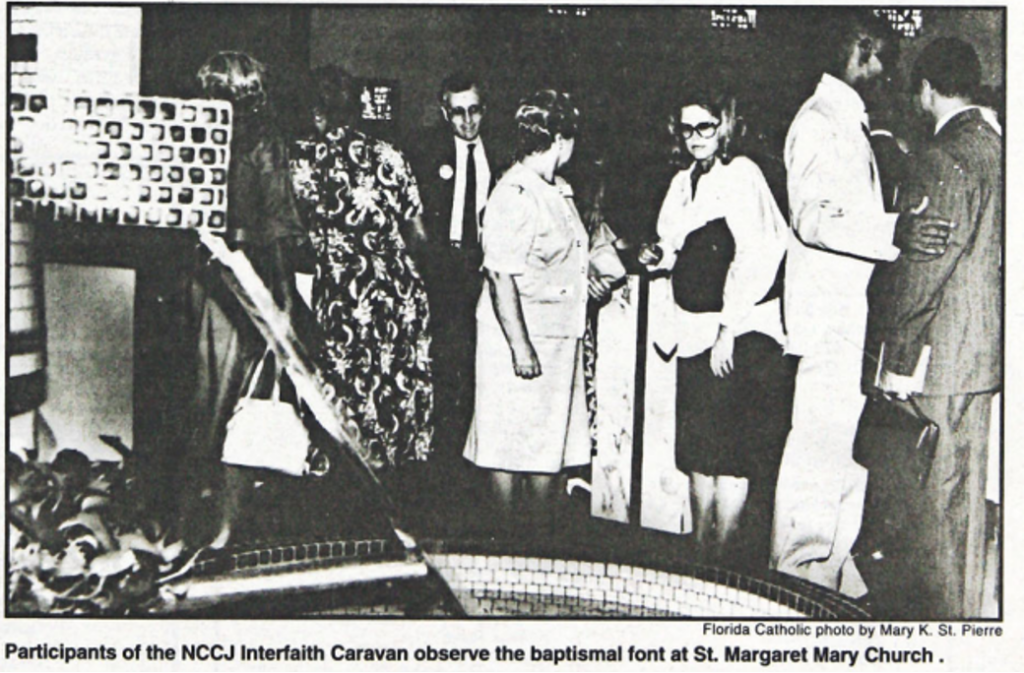 The parish participates in activities associated with the Orlando chapter of the National Conference of Christians and Jews; Bishop Norbert Dorsey is the chapter president. The “Interfaith Caravan” visited the church to learn about the Catholic faith.

Renovations were made to the Parish Hall to add a new upper-level addition for classrooms to accommodate the school’s 120 seventh and eighth grade students.

Major Interior renovations were made to the church building including new carpet, changes to the choir area, refinishing the pews and adding two wheel chair accessible sections, installation of a new baptismal font near the narthex, establishing the Chapel of Reservation in the sanctuary, repainting, adding new lighting, and a new acoustical sound system. 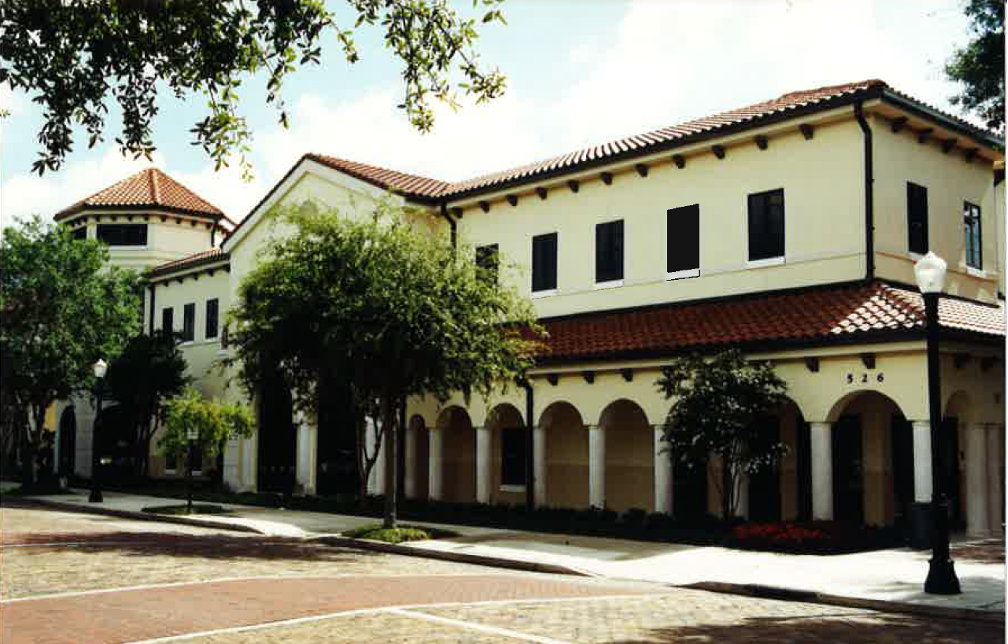 Construction began for a new Family Life Center which was dedicated in October 2002.

The parish is recognized in a national study as “outstanding” for its participative, well-planned liturgies directed by a dedicated team, Scripture classes, lecture series, programs for seniors, and the Family, Friends & Chicken Soup program, which provides meals and rides to those in need. "I suppose it's nice to be recognized, but what we do here is not for recognition," said Father Richard Walsh. “We try to do meaningful work as participants in the hand of God."

National Day of Prayer after 9/11 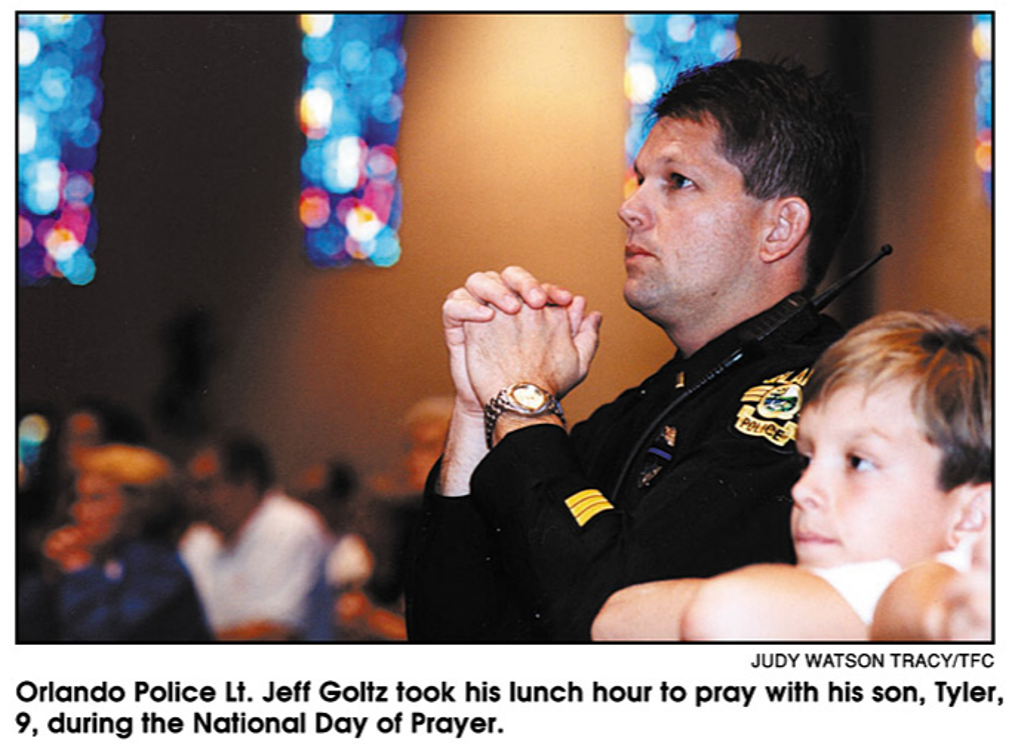 Parishioners attend a special Mass for the National Day of Prayer and Remembrance for those who died on September 11. "We are asking the Lord to raise us up during this dark hour," said Father Walsh.

The parish begins a Haitian Ministry involving staff, parishioners and the parish school.  A three year school renovation project, “Building Our Future,” begins. This ministry grew into much more, including building multiple Churches and dozens of Chapelle's all over the Island of Haiti.

As part of the Year of Evangelization the parish produced a DVD titled “Real Presence,” featuring interviews with parishioners about their ministries in the church showing how they represent the real presence of Jesus Christ in the world. 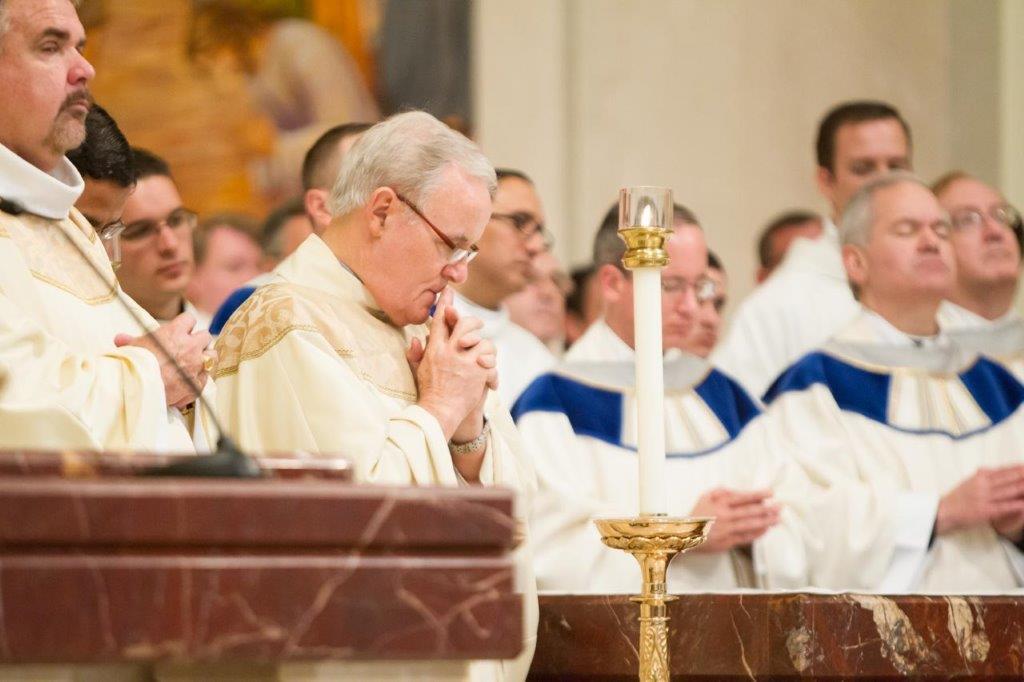 In June Father Walsh was named Diocesan Administrator serving until John Noonan, appointed in November by Pope Benedict XVI as the fifth bishop of the Diocese of Orlando was installed on December 16.

Renovations were made to the church which included a new bell tower with a bell cast in France, and enlargement of the narthex with the addition of a rose window. Bishop John Noonan blessed the bell on October 18, and it was installed on October 22. 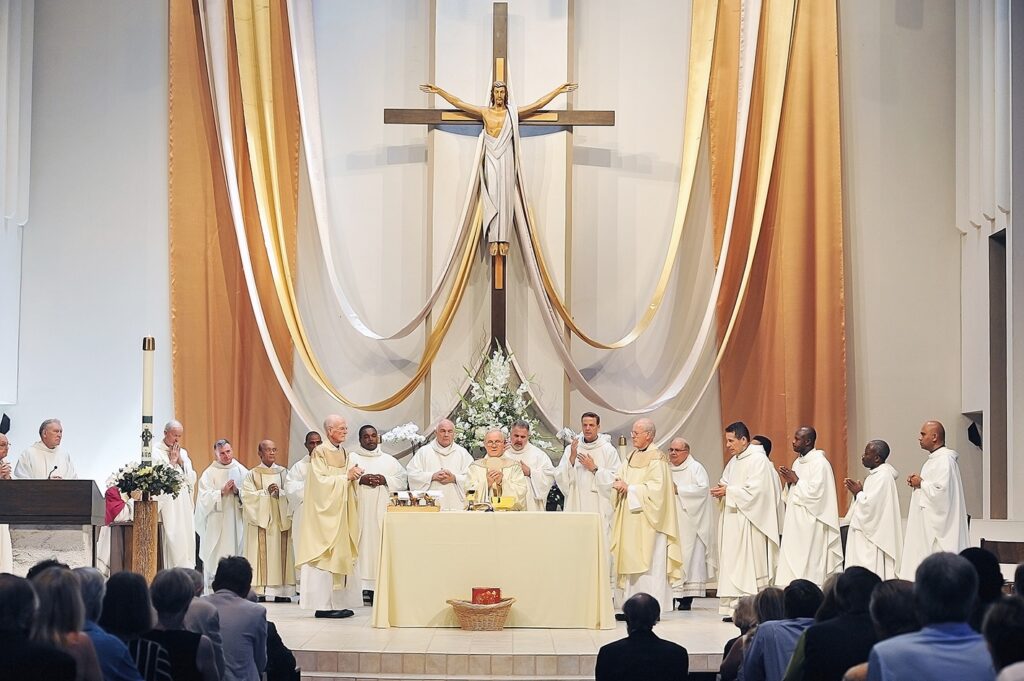 Bishop Noonan told us: "The Supreme Pontiff Francis enrolls Reverend Richard Marian Walsh of the Diocese of Orlando as Chaplain of His Holiness given at Vatican on June 28 during the Year of our Lord 2019." This letter states that Fr. Walsh is now a Monsignor!

Each week will be providing two questions from the Gospel reading, one for children and one for adults. Please prayerfully reflect on and discuss these questions.
Children: How can I get ready for Jesus?
Adults: Is it is easy to prepare for something when the timing is unknown?